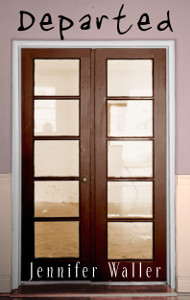 One day, he just stopped coming around. It wasn’t something I noticed at first, I mean how often do you notice when the dead don’t appear. But a part of me had gotten used to his regular visits, and as the days stretched into weeks and then months I slowly realized that I might never see him again.

I wasn’t sure if I was supposed to be happy, or sad. There aren’t any real etiquette guidelines for dealing with the dearly departed, at least none that I’ve ever found.

I think I finally realized I missed his presence during the long and lonely days of winter break. My housemates had gone home for the holidays, but since my family was closer I planned to wait until Christmas Eve to drive to my parent’s house.

It’s funny how different an empty house feels compared to a full one, especially one that has stood for over a hundred years. The soft noises as it settles in the cool of night, or the creaking third stair take on a different tone. Sounds that I took for granted on a normal day became ominous in the lack of companionship. The stories I’d heard as a kid made more sense.

It was those days I found myself missing my grandfather’s spirit most of all. He had always been so protective of the house; never letting me wander alone as a child, always watching to make sure I didn’t break anything. Even when I was older he always insisted that I stay out of particular rooms. So when he first appeared to me after passing it was almost a sense of nostalgia, he was still guarding the house, making sure I took care of it.

The new year came and went, and I was looking forward to my housemates’ return. I was in the kitchen, cleaning up from dinner, and had the speaker turned up loud with my favorite stream when I heard the knocking noise. I turned down the music, thinking that perhaps a neighbor had been annoyed at the volume during the late evening, and walked to the door. However, when I looked outside nobody was there.

I went back to what I was doing, but soon heard the knocking noises again. They were coming from the drawing room.

I walked in and flicked on the light. The chandelier glittered and antiques that had been in the house for decades reflected the illumination. My grandfather had always been so strict about that room, as if my very presence could shatter the valuables within.

The room was empty, and the sounds had stopped. I turned and had my hand on the switch when I felt hands close around my throat.

I reached to try and pry the intruder off me, but my fingers closed on empty air. I felt myself lifted, the pressure on my windpipe increased, and yet my struggles amounted to nothing more than futile thrashing. I tried to scream for help, but no sound came out.

It was while the darkness was closing in on my vision that the memories came back to me: my grandfather, sitting at our kitchen table, sobbing because my grandmother had died in the house while he was away on a fishing trip. My dad asked what room. Grandfather said it was the drawing room. My dad said something about an aunt I had never known dying in the same room when they were children. Mom asked if they ought to sell the house. Grandfather said he couldn’t bear to watch it happen to another family.

“She knew not to go in there alone…” were the last haunting words from my grandfather before he broke down into wails of grief.

Icy laughter was the last thing I heard before I died.

I don’t know the full history of the house, but, like my grandfather, I cannot bear for somebody else to suffer my fate. I don’t know what drove him from his self-assigned role as guardian, but it is my duty to take his place.

As long as I roam this house, nobody will ever be alone in that room.